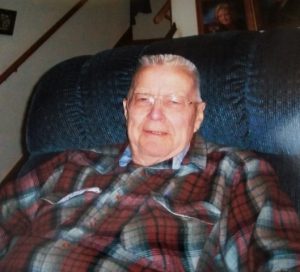 William R. “Bill” Johnson, 92, of Warren, PA., died Sunday afternoon, February 17, 2019 at Warren General Hospital. He was born December 10, 1926 in Jamestown, N.Y., to the late John Arthur and Anna Myers Johnson. He was a 1948 graduate of Jamestown High School and the former Bliss Electrical School of Washington, D.C. Bill had served with the U.S. Navy.

He was employed with the former Westberg Electric of Jamestown, N.Y., and was owner and operator of Warren Electric Motor from 1963 until 2003, retiring at the age of 77.

He enjoyed bowling, golfing and traveling in his RV. He was a member the Tuesday afternoon pinochle group at the Warren Senior Center.

He is remembered for being a generous and loving man.

Friends may call at the Donald E. Lewis Funeral Home, Inc., 304 East Street, Warren, PA., on Wednesday, February 20, 2019 from 6 to 8 P.M. and one hour prior to the funeral on Thursday, February 21, 2019 at 11:00 A.M. with Rev. Nate Fugate, Pastor of Otterbein United Methodist Church, Pittsfield, PA., officiating. Full military honors will be conducted by members of the Clarendon/Sheffield V.F.W. Funeral Detail and the U.S. Navy.

Interment will be in Pine Hill Cemetery, Falconer, N.Y.