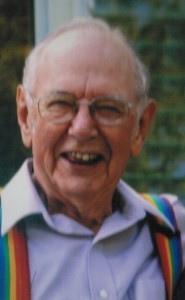 Bill (William) H. Dyke, 83, of Warren, PA. died Sunday morning, October 30, 2011 at his residence. He was born in Warren, PA. on March 18, 1928 to the late George H. and Mary Lee E. Seekings Dyke. He grew up in North Warren and in his high school sophomore year started working at the former Harvey and Carey Drug Store where he became an Apprentice Pharmacist. He attended the University of Buffalo with original intentions of becoming a Pharmacist but abandoned that for a career in business and marketing. He joined Household Finance Corporation in Erie and later served as manager of the Meadville and New Castle, PA. offices doubling the size and volume of both offices under his leadership. In 1956 he organized and founded Try-M Finance in Warren at 210 Liberty Street where over the next twenty years the company grew to nine offices in Northwest PA. communities. The finance company was sold to First National Bank of Mercer in 1976, which changed the name to FNB and still operates the branch from the original location. In 1962 he and four others acquired Hillcrest Development Corporation, a 300 acre plot in North Warren. Four of those had built the only existing homes in the development area. He served as business manager, secretary-treasurer with new homes continuing to be built resulting in the Hillcrest area today. The BBDD Oil Company was formed where he served as President resulting in a producer being acquired for an unused area of the development. During that same period he with others built the first Ponderosa Steak house in Meadville as well as a building for American General Life Insurance. In 1968 under the name of W.H. Dyke, Financial Enterprises he acquired property now occupied by the expanded Thorne’s BiLo Market. In 1973 he acquired O.K. Service and Sunset Mobile Home Park in North Warren. In 1975 he and partner Howard Jarvis established a Laundromat, Cottage Cleaning Center on Pennsylvania Ave property he had earlier acquired. The building and business were lost in a multi building fire at Reliable Furniture Company in 1976. Dyke proceeded to acquire the adjacent properties of Reliable and Daley’s Diner where he with a Meadville Associate brought the first Burger King Restaurant to Warren. In 1976 he helped organize and charter the original Cargo Auto Parts Co. in a building he owned in North Warren. Following the sale of Try-M Dyke pursued a dream to become an Instructor Trainer of Dale Carnegie Courses. After a year of preparation and training in Pittsburgh he embarked upon a career that covered 32 years and one hundred fifty 12-14 week classes across the northern part of Pennsylvania. Graduates numbered nearly 6,000. During that period Dyke influenced and helped train about a dozen Instructors. In 1981 he was honored by being chosen Instructor of the Year. In 2007 he was inducted into a group known as “Elite Seven” Instructors and in 2008 was inducted into the Carnegie Instructor Hall of Fame.

During his career Dyke served as an officer and Director of the Jaycees and Kiwanis clubs in Meadville, New Castle and Warren. In that capacity he was instrumental in establishing and constructing the Riverfront Sign, “Warren Wishes You A Merry Christmas and a Happy New Year” as well as the annual Fourth of July parade and other Jaycee projects. In the year 2006-07 he was named Kiwanian of the Year. In Warren he served on several community groups including United Way and the YMCA and North Warren Volunteer Fire Dept’s building funds. In 1958 Dyke and others organized and chartered the Warren Aviation Club at the old Warren Airport. The club continues after 53 years at the Brokenstraw Airport in Pittsfield, PA. During that period Dyke privately owned several aircraft with partner, Dr. John Huey and one with Dr. Walter Jones. Dyke’s commitment to his church, First Presbyterian of Warren encompasses 55 years where he has been active over many years in serving as a Deacon and Elder. He was a past president of the Presbyterian Men’s Association, Superintendant of Junior High Sunday School where he taught ninth grade Communicants classes and served as a leader in various projects and committees. More recently he was chairman of the Farmer’s Market project over a period of 10 years. During that period Farmer’s Market proceeds topped $70,000 in funds to the Presbyterian World Hunger Program. He was a member of the Congregational Life Committee of the Lake Erie Presbytery for a six year period. He was an active member of the American Cancer Society Relay For Life First Presbyterian Church team. He is survived by his wife of 64 years, Eleanor “Ellie” Meabon Dyke whom he married October 4, 1947 near Plumer, PA., 5 Children – Sharon Marchioli and husband, Tony of The Colony, TX., Laurence E. Dyke and wife, Gale of Whitehall, Michigan, Thomas L. Dyke and wife, Kathy of Waterford, PA., Rev. John W. Dyke and wife, Martha of Erie, PA., Ronald E. Dyke and wife, Judi of Pensacola, FL., 1 Sister – Jean Krieg of Warren, PA., 13 Grandchildren, 15 Great Grandchildren, several nieces and nephews. In addition to his parents, he was preceded in death by 1 Brother – Richard J. Dyke, 1 Great Grandson – Chase William Anderson. Friends may call at the Donald E. Lewis Funeral Home, Inc., 304 East Street, Warren, PA. on Tuesday from 2 to 4 and 6 to 8 P.M. A funeral service will be conducted Wednesday at 4:00 P.M. at the First Presbyterian Church, 300 Market Street, Warren, PA. with The Rev. Ellie Johns, Pastor, officiating. Those wishing to place memorials may do so through Hospice of Warren County, 2 Crescent Park, Warren, PA. 16365 or the First Presbyterian Church, 300 Market Street, Warren, PA. 16365 or the Warren Unit of the American Cancer Society, 2 Crescent Park, Warren, PA. 16365. Those wishing to submit e-mail condolences may do so by visiting www.lewisfuneralhomeinc.com