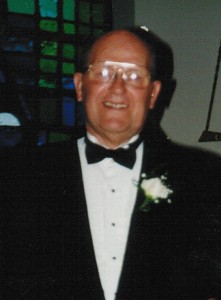 He was born October 27, 1925 in Warren, PA. to the late Harry and Alverna Holden Green. Virgil has resided his entire life in Warren and had served in the U.S. Marine Corp. as a Corporal serving in the South Pacific and China, during World War II.

He was employed for 39 years with United Refinery Company as a supervisor, retiring in 1987. He also owned and operated numerous apartments for 25 years. Virgil was a member of St. Joseph R.C. Church. He is remembered as a strong family man who had a very kind, gentle personality. He enjoyed animals, traveling, sports especially football. In his youth, he was a good athlete, played football in high school and ice skated in China during the service. He and his wife, traveled extensively to the South and spent weekends in Canada. He loved landscaping, lawn work, flower gardening and completing crossword puzzles

Friends may call at the Donald E. Lewis Funeral Home, Inc., 304 East Street, Warren, PA. on Friday from 6 to 8 P.M. where a funeral service will be conducted Saturday at 11:00 A.M. with Msgr. John Lucas, Pastor of Holy Redeemer R.C. Church, officiating. Entombment will be in the Mausoleum of the Ascension in St. Joseph R.C. Cemetery where full military honors will be conducted by members of the Clarendon/Sheffield V.F.W. and the U.S. Marine Corp. Personnel. Those wishing to place memorials may do so through Paws Along The River, 212 Elm Street, Warren, PA. 16365. E-mail condolences may be made at www.lewisfuneralhomeinc.com