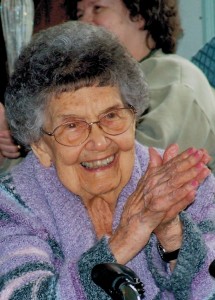 Vesta L. Moore, 95, a resident of the Watson Memorial Home, Warren, PA. and formerly of Sheffield, PA. died Sunday, April 22, 2012 at Warren General Hospital after an illness of the past week.

Vesta along with Ann Curtin, started the Sheffield Well Baby Clinic. She had served as coordinator of the Sheffield Red Cross Bloodmobile and the Warren County Girl Scouts. She was an avid bowler, golfer, cook, accomplished pianist and organist, and currently played at the Watson Home. She also enjoyed flower gardening. She is fondly remembered by those who loved her as being a woman who loved being a wife, mother, grandmother, great grandmother and great great grandmother.

In addition to her parents, she was preceded in death by her husband, Richard W. Moore who she married September 3, 1938 in Ridgway, PA.

Friends may call at the Donald E. Lewis Funeral Home, Inc., 304 East Street, Warren, PA. on Wednesday, April 25, 2012 from 6 to 8 P.M. A funeral and committal service will be conducted Thursday at the First United Methodist Church at 11:00 A.M. with Rev. Dr. Jeffrey Sperling, pastor, officiating. Interment will be in Sheffield Cemetery, Sheffield, PA. In lieu of flowers memorial contributions may be made through the Sheffield Senior Center, or First United Methodist Church or Hospice of Warren County. Those wishing to send e-mail condolences may do so by visiting www.lewisfuneralhomeinc.com