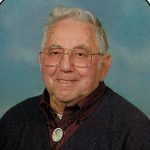 and Santa Bruno Cataldo. He was a resident of Kinzua, PA., until

Army as a Corporal during the Korean War. Umberto was

employed with Pennsylvania Department of Transportation as a

Foreman for 23 years, retiring from there in 1989 and formerly

with Pennsylvania Railroad for 13 years. He was a member of

and Warren Veterans of Foreign Wars Club. He was an avid

He is survived by his 2 children – Donna Boliek and husband,

Richard of Davidsonville, MD., Ricky Cataldo and wife, Kim of

Boliek, III, and Robert (Lucas) Boliek both of Davidsonville, MD.,

In addition to his parents, he was preceded in death by his wife of

Friends may call at the gathering space of Holy Redeemer R.C.

be in St. Joseph R.C. Cemetery. Full military honors will be

conducted by members of the Clarendon/Sheffield V.F.W. Color

Guard. Those wishing to place memorials may do so through

21122. E-mail condolences may be sent by visiting