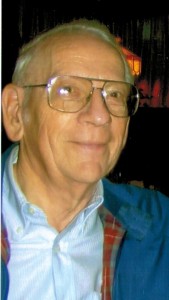 Robert L. Kerner, Sr., 78, of Warren, PA. died Thursday afternoon, August 23, 2012 at the John and Orpha Blair Hospice Home. He was born November 7, 1933 in St. Mary’s, PA. to the late Leo and Caroline DeGroat Kerner. Bob was a resident of Warren since 1963 and formerly of Ridgway, PA. He was a 1952 graduate of St. Leo’s Catholic High School. He employed as a draftsman with the former Elliott Company of Ridgway, PA. and retired after 40 years employment from the former National Forge Company. He was a member of St. Joseph R.C. Church where he was an usher. Was an avid hunter, fly fisherman and gardener.

In addition to his parents, he was preceded in death by 1 Brother – Ted Kerner. Friends may call at the Donald E. Lewis Funeral Home, Inc., 304 East Street, Warren, PA. on Friday, August 24, 2012 from 6 to 8 P.M. where a vigil service will be conducted at 7:45 P.M. Friday evening. A Mass of Christian Burial will be conducted on Saturday, August 25, 2012 at 1:30 P.M. at St. Joseph R.C. Church with Rev. Richard J. Toohey, Pastor, officiating. Entombment will be in the Mausoleum of the Resurrection in St. Joseph R.C. Cemetery. Those who wish to place memorials may do so through St. Joseph Church Educational Center, 600 Pennsylvania Avenue West, Warren, PA. 16365 or Hospice of Warren County, 2 Crescent Park, Warren, PA. 16365. E-mail condolences may be sent by visiting www.lewisfuneralhomeinc.com