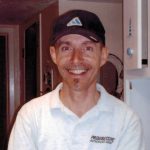 away Wednesday, October 5, 2016 in Florida. With a smile on his face and surrounded by

family, he peacefully passed into his eternal home.

Michael was born August 2, 1956 to William and Constance Mazzuca Brown. He was preceded

in death by his father, as well as his maternal and paternal grandparents.

Michael worked with the disabled for many years both in Pennsylvania and NY. After relocating

with his family to Florida, he worked as an insurance agent.

Michael had a strong faith which he lived daily through service to others. He often put the needs

of others ahead of his own. His sons recall as young boys they would drop everything to lend a

helping hand. Michael was a friend to everyone he met. He is fondly remembered by many as a

mentor and a friend.

The simple pleasures of life were especially meaningful to Michael: gardening, walks on the

beach searching for shells and shark’s teeth, and fishing with his sons and grandson. He loved

interior design and was an avid collector of beautiful art glass pieces. Sports was another passion

of Michael’s. As a young boy and later in high school, he played baseball, won many bowling

trophies and lettered in track and field. He closely followed college basketball as well as his

Brown and granddaughter Aaliyah Lynn Ramos. He is also survived by his mother, Constance

at St. Joseph’s Cemetery. A celebration of Michael’s life was held later in the day.

online at: www.stjude.org The Donald E. Lewis Funeral Home, Inc. was in charge of local

arrangements. Email condolences may be sent by visiting www.lewisfuneralhomeinc.com