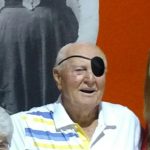 Mark Ross Bevevino, 83, of Warren, PA., and formerly of Nokomis, FL, died Thursday evening, August 18, 2016 at the John and Orpha Blair Hospice Home after an illness since April 2016.

He was born March 2, 1933 in Warren, PA.  Mark was the son of Joseph Anthony and Jane L. Lytle Bevevino.  He was a lifelong Warren area resident and a 1951 graduate of Warren High School. He attended for 2 years at Penn State Behrend and then went into the U.S. Army.  He was a member of St. Joseph R.C. Church, Warren Elks Lodge, Warren Moose Lodge 109, American Legion Post 135, and Cable Hollow Golf Course.  Mark was an avid hunter, golfer and card player. He was a man of great character with a sense of humor to the very end.

Those wishing to place memorials may do so through Hospice of Warren County, %John and Orpha Blair Hospice Home, 1 Main Street, Warren, PA. 16365.  E-mail condolences may be sent by visiting www.lewisfuneralhomeinc.com