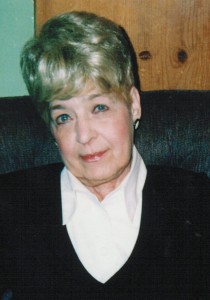 Marilyn Kays Ciprich, 77, of Warren, PA. died Friday afternoon at 5:00 P.M. January 27, 2012 at the Warren Manor Nursing Home after an extended illness. She was born October 15, 1934 in Warren, PA. to the late Harold J. and Mary E. Grace Kays. She was a resident of Warren her entire life and was a 1954 graduate of Warren High School. She was employed with the former El-Tronics Corporation for 16 years and former Service Hardware for 7 years and retired from Blair Corporation after 30 years service. Marilyn was a former member of the Warren American Legion Ladies Auxiliary.

She is survived by her daughter – Shelly Perschke and her husband, Bill of Scandia, PA., both of Warren, PA., 1 Granddaughter – Carrie Burgess and 1 Great Granddaughter – Alexis Christensen, several nieces and nephews. In addition to her parents, she was preceded in death by her husband, Peter P. Ciprich whom she married June 21, 1958 in Warren, PA. who died August 28, 2010, 1 Sister who died in infancy, Dolores Kays, 3 Brothers – Richard “Dick” Kays, Gary and Charles “Bud” Kays 1 Niece – Sylvia Kays. A private funeral and committal service will be conducted at the Donald E. Lewis Funeral Home, Inc., 304 East Street, Warren, PA. with Rev. Marcus Briggs, Chaplain of the Warren General Hospital, officiating. Interment will be in St. Joseph R.C. Cemetery. Those wishing to place memorials may do so through the Arthritis Foundation or the American Heart Association or the American Cancer Society or a charity of one’s choice. Those wishing to submit e-mail condolences may do so by visiting www.lewisfuneralhomeinc.com