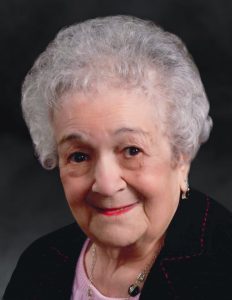 Maria Lucia Coppola, 102, of Warren, PA., and a resident of the Rouse Warren County Home, Youngsville, PA., passed away peacefully, there Monday afternoon, October 8, 2018.  She was born March 15, 1916 in Warren, PA.  Maria was the daughter of the late Angelo A. and Clara “Carrie” M. Nicotera Lucia.  Maria graduated from St. Joseph School in 1929 and Warren High School Class of 1933.  She was employed as a secretary with the former New Process Company from 1933-1937.  Maria was owner/operator with her husband, of the former Paulmar Restaurant, (now the Draft House) and the former East Side Fruit and Produce.  She has resided in Warren most of her life and was a former resident of Tempe, AZ for 30 years, before returning to Warren in 2000.  She was a member of Holy Redeemer R.C. Church where she was a former volunteer and enjoyed playing Bridge, other card games and was active in the Woman’s Club.  She was a lifetime member of the Catholic Daughters of America.  She was a very gracious woman with a smile for everyone and a special twinkle in her eyes.

A Mass of Christian Burial will be conducted at Holy Redeemer R.C. Church, 11 Russell Street, Warren, PA., on Saturday, October 13, 2018 at 10:00 A.M. with Fr. Scott Jabo, President of Cathedral Preparatory School, Erie, PA., and Fr. James Gutting, Pastor, co-officiating.  Entombment will be in the Mausoleum of the Resurrection in St. Joseph R.C. Cemetery.  Those wishing to place memorials may do so through Holy Redeemer Church Building Center Fund.  E-mail condolences may be sent by visiting www.lewisfuneralhomeinc.com