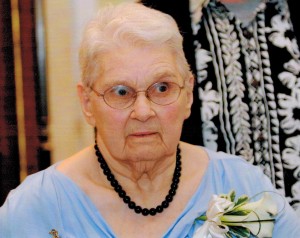 Margery I. Woods, 84, of Warren, PA. died Saturday morning, September 1, 2012 at Warren General Hospital after an illness of the past week. She was born October 28, 1927 in Scio, New York to the late Ernest and Mildred Housenick Rounds. She has resided in Warren for the past 55 ½ years. Margery was employed with the former Struthers Wells Corporation as a secretary and with Kinzua Valley and Warren Manor Nursing Homes as their cook, retiring from there in 1986. She also owned and operated a private day care center for 15 years from her home. She was of the Lutheran Faith. Margery was a member of the North Warren Volunteer Fire Dept. Ladies Auxiliary, Circle 8 Square Dancing Group and enjoyed crocheting.