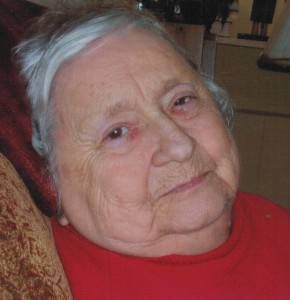 Marcia A. Cosmano, 82, of Russell, PA. died at her residence Monday morning, January 16, 2012 surrounded by her family after an extended illness. She was born July 25, 1929 in Erie, PA. to the late W. Howard and Ruth V. Torngren Austin. She has resided in the Russell and Warren, PA. area since 1956. Marcia was a 1947 graduate of Strong Vincent High School, Erie, PA. She was formerly employed with the former Warren National Bank.

She was a member of the Warren Senior Center, she enjoyed traveling, reading and had been a avid sewer. She is fondly remembered as a loving wife, mother and grandmother.

She is survived by her husband of 54 years, Stephen S. Cosmano whom she married August 3, 1957 in Warren, PA., 2 Daughters – Catherine Phillips and husband, William Henry, Stephanie Tannler and husband, James 1 Sister – Jessie Austin all of Warren, PA., 4 Grandchildren, Stephen Phillips, Emily Tannler and Fiance – Nicholas Bailey, Susan Campman and husband, Joseph, Sara Tannler, several nieces and nephews also survive. In addition to her parents, she was preceded in death by 1 Sister – Audine Schwab. Friends may call at the Donald E. Lewis Funeral Home, Inc., 304 East Street, Warren, PA. on Tuesday from 2 to 4 and 6 to 8 P.M. A funeral and committal service will be conducted Wednesday at 11:00 A.M. at the First United Methodist Church, 200 Market Street, Warren, PA. with Dr. Rev. Jeffrey Sterling, Pastor, officiating. Entombment will be in the Mausoleum of the Ascension in St. Joseph Cemetery. Those wishing to place memorials may do so through Alzheimer’s Association of Northwestern PA., 110 W. 10th Street, Erie, PA. 16501 or Hospice of Warren County, 2 Crescent Park, Warren, PA. 16365. Those wishing to submit e-mail condolences may do so by visiting www.lewisfuneralhomeinc.com