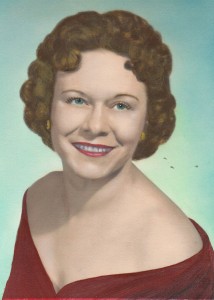 Lois E. Schmatz Doub, 88, of Warren, PA. died in her sleep peacefully Sunday, February 5, 2012 at her residence. She was born October 11, 1923 in Titusville, PA. to the late John and Florence Kittell Schmatz. She was a Warren area resident most of her life and had been employed with the former Paramount Furniture Company and also at the former Pennsylvania Bank and Trust Company for 5 years a bank teller. She was a member of the Warren Garden Club.

Sister-in-law, Shirley Schmatz Munksgard, 1 Niece-Barbara Garrett and fiance – Steve Hoden and 1 Nephew-James Schmatz and companion, Sue VanCise, 1 Great Niece – Alicia Garrett all of Warren, PA. In addition to her parents, she was preceded in death by her husband, Robert E. Doub, Sr. who died September 5, 1982 whom she married February 11, 1951 in Jamestown, N.Y., 1 Son – John Thomas Doub on February 14, 1986, 1 Brother – Edward Schmatz. Friends may call the Donald E. Lewis Funeral Home, Inc., 304 East Street, Warren, PA. on Wednesday from 2 to 4 and 6 to 8 P.M. where a funeral service will be conducted Thursday at 11:00 A.M. with Msgr. John Lucas, Pastor of Holy Redeemer R.C. Church, officiating. Interment will be in Pine Grove Cemetery, Russell, PA. Those wishing to place memorials may do so through the American Cancer Society or a charity of one’s choice.