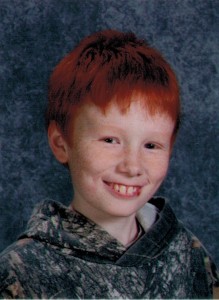 Justin Thomas “J.T.” Sullivan, 10, of Warren, Pa. died Monday, April 16, 2012 in UPMC Children’s Hospital, Pittsburgh, Pa. J.T. was born in Warren on February 25, 2002 to Charles R. and Hope M. Lauffenberger Sullivan. He was a fourth grader at Warren Area Elementary Center. J.T. loved the outdoors – whether shooting guns or four wheeling. He was also quite a fire bug. In his final moments, J.T. gave the gift of life to others in need by donating his organs.

In addition to his parents, he is survived by his maternal grandmother – Kathy Gross Lauffenberger, of Warren; paternal grandparents – Robert E. and Pamela E. Black Sullivan, of Emlenton, Pa.; a brother and sister – Dean Paul and Madelyn Grace Sullivan, at home, paternal aunt – Crystal Sullivan Space, her husband, Daniel and children – Jacob and Jade of Shippenville, Pa.

J.T. was preceded in death by his maternal grandfather – Hugh T. Lauffenberger; and his uncle – Kevin Sullivan.

Friends may call at the Donald E. Lewis Funeral Home, Inc. 304 East St., Warren, 16365 on Friday, April 20, 2012 from 2:00 to 4:00 and 6:00 to 8:00 pm. A funeral service will be conducted 11:00 am Saturday, April 21, 2012 in the First Church of the Nazarene, 907 Pennsylvania Ave. East Warren, with Rev. Marcus Briggs, Chaplain of Warren General Hospital, officiating. The family will receive friends at the church one hour prior to the funeral. Private interment will follow in Warren County Memorial Park. Memorial contributions may be directed to C.O.R.E. 204 Sigma Drive, RIDC Park, Pittsburgh 15238. Online condolences may be offered to the family at www.lewisfuneralhomeinc.com.