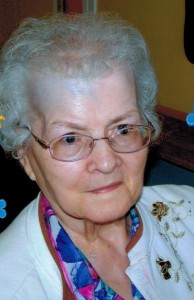 Irene Nosel Zawacki, 85, formerly of Starbrick and a resident of the Rouse Warren County Home, Youngsville, PA. died there Saturday evening, May 26, 2012. She was born September 27, 1926 in Warren, PA to the late Nicholas and Helen Predgo Nosel. She was a lifelong resident of the Warren area.

A graduate of Warren High School, Class of 1944, she was employed with the former Loranger’s Plastic Corp. and retired January of 2000 from the Blair Outlet Store where she had worked for 27 years. She was a member of St. Joseph R.C. Church and had served as Past President of the Starbrick Elementary School. She was a Troop Leader for the Starbrick and Beaty Girl Scout Troops for 10 years. She is remembered as a mother devoted to her family, especially her children and grandchildren.

She was proud of instilling strong family values. She enjoyed reading and was an avid card player.

She is survived by her four children – John E. Zawacki and wife, Cathryn; Alex D. Zawacki and wife, Anne; Mark A. Zawacki and wife, Barbara; all of Warren, PA., and Debra G. Egge Massachusetts. One sister – L. Gayle Pratt and husband, Donald of Duncansville, PA., two brothers – Fred Nosel and wife, Phyllis of Wallingford, CT. and Larry David Nosel and wife, Mary Lou of Honesdale, PA; two sisters-in-law, Joan Nosel of Warren, PA. and Joanne Nosel of Russell, PA.; eight grandchildren – Andrew, Benjamin, Ryan, Katie, Derek, Tyler and Jared Zawacki, Bryan Egge; One great granddaughter – Ella Zawacki. Several nieces and nephews also survive. In addition to her parents, she was preceded in death by her husband of 48 years, Edward John Zawacki who died Dec. 3, 1996 whom she married June 19, 1948 in Warren, PA.; one daughter – Rebecca J. Dove; one sister – Josephine Schust; two brothers – George and Nick Nosel. Friends may call at the Donald E. Lewis Funeral Home, Inc., 304 East Street, Warren, PA. Tuesday, May 29, 2012 from 2 to 4 and 6 to 8 P.M. where a vigil service will be conducted Tuesday at 7:45 P.M. A Mass of Christian Burial will be conducted Wednesday, May 30, 2012 at 11:00 A.M. with Rev. Fr. Richard J. Toohey, Pastor, officiating. Internment will be in Kitchen Cemetery. In lieu of flowers, memorials may be made through Friends of the Rouse, P.O. Box 207, Youngsville, PA. 16371 or Kitchen Cemetery Association, %Mr. Jim Salapek, 4583 Yankee Bush Road, Warren, PA. 16365. E-mail condolences are being accepted by visiting www.lewisfuneralhomeinc.com