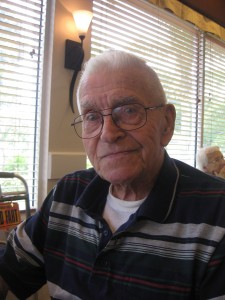 Harold L. Seymour, 93, formerly of Warren, PA. and a resident of the Lynmoore in Fort Pierce, Florida died at his residence on Tuesday morning, August 7, 2012 after an extended illness. He was born March 6, 1919 in Warren, Pa. to the late Alva and Bertha Crozier Seymour. He had resided in Warren most of his life, moving to Florida in 2000.

Harold was a 1937 Graduate of Warren High School and had served in the U.S. Army where he was a Prisoner of War during World War II. He was employed as a truck driver with the United Refinery Company retiring from there in 1980 after many years service. He was a member of St. Joseph R.C. Church where he had served as a former church usher.

Friends may call at the Donald E. Lewis Funeral Home, Inc., 304 East Street, Warren, Pa. on Friday, August 10, 2012 from 6 to 8 P.M. where a vigil service will be conducted at 7:45 P.M. A Mass of Christian Burial will be conducted at St. Joseph R.C. Church on Saturday, August 11, 2012 at 10:00 A.M. with Msgr. John Lucas, Pastor of Holy Redeemer R.C. Church, officiating. Interment will be in St. Joseph R.C. Cemetery. E-mail condolences may be sent by visiting www.lewisfuneralhomeinc.com