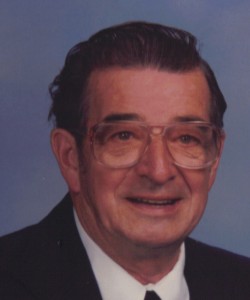 George W. Cunningham,, Jr., 90, of N. Warren, PA. died Monday morning, February 13, 2012 at the Warren General Hospital after an extended illness. He was born November 5, 1921 in Erie, PA to the late George W. and Florence M. Severin Cunningham, Sr. He has resided most of his life in Warren and was a 1940 graduate of Warren High School and attended Syracuse University. He had served in the U.S. Navy Air Corp. as an aviation machinist mate 2nd class during the Second World War. After the service he was employed with the former Warren Components as production manager retiring from there after 20 years service. He was a member of St. Joseph R.C. Church and was a 4th degree member of the Warren Knights of Columbus Council, Warren Barbershoppers and had been an active member of the Warren Players Club.

He is survived by his children – Celine Jewart and husband, Al of Austin, PA., Kathleen Shattuck and husband, Rodger of N. Warren, PA., John Cunningham and wife, Valerie of Trinity, FL., William Cunningham and wife, Ruth Ann, of Perrysville, MD., David Cunningham of Michigan; 1 Sister-in-law, Jacquelyn “Jackie” Smith Cunningham of N. Warren, PA.; 6 Grandsons; 3 Great Grandchildren; and several nieces and nephews. In addition to his parents, he was preceded in death by his wife of 52 years – Shirley Hilkirk Cunningham who died November 4, 2002, and he married September 23, 1950 in Warren, PA.; 1 Sister – Mary Patricia Rimer; and 1 Brother – Robert Cunningham.

Friends may call at the Donald E. Lewis Funeral Home, Inc., 304 East Street, Warren, PA. on Tuesday from 6 to 8 P.M. where members of the Knights of Columbus 4th Degree members will stand guard and a joint vigil service will be conducted at 5:45 P.M. A Mass of Christian Burial will be conducted at St. Joseph R.C. Church on Wednesday at 10:30 A.M. with Rev.Fr. Richard J. Toohey, Pastor, officiating. Entombment will be in the Mausoleum of the Ascension in St. Joseph R.C. Cemetery. Those wishing to place memorials may do so through a charity of one’s choice. Online condolences may be offered at www.lewisfuneralhomeinc.com