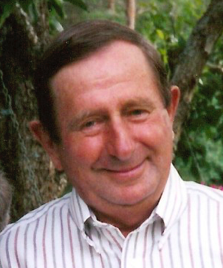 Edward A. Allen, 92, of N. Warren, PA., died Tuesday, June 14, 2022, at his residence. He was born July 27, 1929, son of the late John James and Marie Bertha Nitche Allen, Sr. and was a lifelong Warren resident. In addition to his parents, he was preceded in death by his wife, Barbara McClellan Allen and his son – Kelly D. Allen, 3 Brothers – David Allen, John Allen, Jr., and Joseph Allen, and a sister – Mary Eggleston.

Edward graduated in 1947 from Warren High School and subsequently served in the Korean War with the Signal Corp. At the conclusion of his military service, he was employed for 40 years with Penelec; retiring in 1987. He loved caring for his large vegetable garden and all activities outdoors. He was a true family man who greatly enjoyed chatting with the local youngsters and his grandchildren. He supported his children’s interests by volunteering as a sports booster, baseball coach, band booster, Cub Scout and Boy Scout leader. He enjoyed helping people in many ways. Ed was also a member of Holy Redeemer R.C. Church.

Family and friends will be received on Monday, June 20, 2022, from 10:00 A.M. to 11:00 A.M. at Holy Redeemer R.C. Church, 11 Russell Street, Warren, PA. A Mass of Christian Burial will follow at 11:00 A.M. with Fr. Stephen Schreiber, Pastor, officiating. Interment will be in St. Joseph R.C. Cemetery. Those wishing to place memorials may do so through Hospice of Warren County, www.hospiceofwarrencounty.org 1 Main Avenue, Warren, PA. 16365 or Paws Along the River, 212 Elm Street, Warren, PA. 16365. E-mail condolences may be sent by visiting www.lewisfuneralhomeinc.com The Donald E. Lewis Funeral Home, Inc. has been entrusted with funeral arrangements.