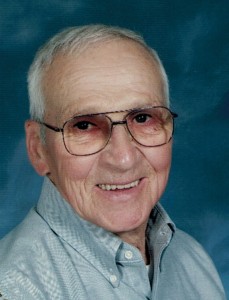 Earl S. (Sonny) Robeson, Jr., 80, of Russell, PA, died Wednesday morning, August 29, 2012, at his residence. He was born October 13, 1931 in Beccari, Clearfield Co., PA to the late Earl S. and Margaret Dobish Robeson, Sr. He had served as a Corporal with the U.S. Army, providing combat duty in Korea. Earl had lived in Cleveland, OH for 10 years where he was employed at Baker Lift Truck, and then moved to Russell, PA and has resided there for the past 46 years. He was employed as a machine operator at Carborundum/Monafax Company for 30 years, retiring in 1996. He was an avid hunter and fisherman. He loved spending time with his family, especially his grandchildren and his Golden Retriever, Jax. He is remembered as a person who loved to tell a good story. He is survived by his wife of 56 years, Debra J. Gibson Robeson, who he married May 5, 1956 in Cleveland, OH, 4 Children Meg Robeson of Warren, PA, Rick Robeson and wife, Sutton of Casper, WY, Scott Robeson and wife, Lesley of Lander, WY, Derek Robeson of Russell, PA., 4 Siblings Marlene Pearce of Loraine, OH, Joanne Stack and husband, Andy of Cleveland, OH, Don Robeson and wife, Faye, Kenneth Robeson and wife, Donna, all of Russell, PA, 4 Grandchildren Tassie, Ashlee, Brynn, and Nicholas Robeson, 2 GreatGrandchildren Nakita and Nicoli Robeson, several nieces and nephews. A private family gathering will be conducted at the convenience of the family. Those wishing to place memorials may do so through the Warren Cancer Center, 2 Crescent Park, Warren, PA 16365. Email condolences may be sent by visiting www.lewisfuneralhomeinc.com. The Donald E. Lewis Funeral Home, Inc. has been entrusted with funeral arrangements.