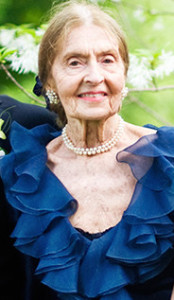 The world lost a magnificent woman on Friday June 26th, 2015. Dorothy Dunham Harris was born on August 8, 1921 in Erie, PA to Leon Burnett Dunham and Ethel Blanche Weston Dunham. Her strong character and independent nature enabled her to design, build, and live alone in her current home and carriage house in Warren, PA. Previously, she had helped to design and build her home (now the Crary Gallery) with her husband Stuart J. Myers after a trip to Italy. She was always physically active, loved gardening and walking 5 miles a day with her beloved dogs until she was 90 years old. Dorothy loved people, discussions, and entertaining. She loved to cook and even during the last week in the hospital worried that she couldn’t serve her guests hors d’oeuvres. When asked by her granddaughter what the secret to her longevity was, Dorothy responded, “butter”. It was true that she used butter and cream liberally in her cooking throughout her life and drank at least a quart of milk every day. She loved music and dancing; even with a cane she was impossibly graceful and uninhibited.

Dorothy was multifaceted. Her interests included anything from international cooking to floral arrangements, even flight lessons; nothing was beyond her realm of possibilities. She would frequently just burst into song and dance to express her joie de vivre. Although she was strong willed and demanding, with high expectations for herself as well as others, she was concomitantly loving, gentle, and philanthropic. She was almost always worried about someone.

Dorothy loved interiors both those of the psyche and of homes. Her intellectual curiosity was extensive; she was a bibliophile and an avid reader of psychology especially Carl Jung, biographies, politics, philosophy, and art until the last month of her life. She had a distinctive sense of style and elegance as evidenced both in her homes’ interiors and her love of fashion and jewelry. She loved muted color schemes, especially greens. She showed a lifetime passion for art and was a collector of art, antiques, and furniture. Dorothy studied fashion design as a member of the charter class at Endicott College. Then she continued her education studying studio art and art history at Smith College and Greenfield Community College. She had a studio in Greenfield, MA and sculpted and painted in oils both in Warren and Greenfield, MA. She enjoyed the theatre and had shelves of playbills. She loved gardens and nature, particularly birds. She was an amazing seamstress often creating not only her own clothes but also those for her children and grandchildren. She was a former member of the Warren Woman’s Club, Warren Shakespeare Club, Conewango Valley Country Club, League of Women Voters, Warren Art League, Warren General Hospital Auxiliary, Warren Garden Club, Valley Community Land Trust, Kittansett Club, and the Beverly Yacht Club. She was a lifelong supporter of the arts, education, environment, conservation, wildlife, animal welfare, Native American culture, Tibetan culture, civil rights, and women’s rights.

A memorial party for friends and family will be held to honor Dorothy on her birthday, August 8, 2015 at the Conewango Club at 5:00PM. In lieu of flowers, any contributions may be made to the Fund for Human Possibility, P.O. Box 331, Chapel Hill, NC 27514, or the charity of your choice. Arrangements have been entrusted to the Donald E. Lewis Funeral Home, Inc., 304 East Street, Warren, PA. E-mail condolences may be sent by visiting www.lewisfuneralhomeinc.com