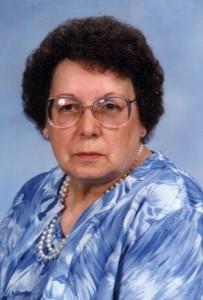 Doris Cecil Reynaud, 87, of Warren and formerly of Erie, PA.,died Wednesday, September 9, 2015, at Warren General Hospital after a lengthy illness. She was born on December 7, 1927 in Erie, PA, to the late Percy Louis Reynaud and Eunice Ann Tauzin Reynaud. In the early 1950s Doris moved from Erie to the Warren area. She worked as an Aide at Warren General Hospital for 35 years and retired in 1993.

Dois was a member of St. Joseph Roman Catholic Church, where she was a member of the Altar Rosary Society and Catholic Daughters of America. She volunteered at the Warren Senior Center, and was active and independent until the last few years when health issues prevented her from getting around easily. She enjoyed watching television game shows and movies on TV (some of her favorite shows were Wheel of Fortune and Family Feud), doing word search puzzles and dinning at local restaurants with friends. In her earlier years she made frequent trips to Erie to visit family, where she also enjoyed attending games of Erie’s minor league hockey team. In her later years, Doris had lengthy bi-weekly telephone conversations with her nieces, Linda and Bonnie.

She is survived by her niece Linda Ann Matthews Aikin (husband Gary) of Cary, North Carolina, by her niece Bonnie Lee Matthews of Erie, by her brother-in-law Lynn William “Jack” Matthews of Erie, and by her many friends in Warren, who were a great help and comfort in her last few years. The family would like to particularly acknowledge with gratitude the support and friendship provided by Elaine Taraska of Warren. She was predeceased by her parents and by her sister Betty Jane (Elizabeth) Reynaud Matthews.

Friends my call at St. Joseph Roman Catholic Church, 600 Pennsylvania Avenue West, Warren, PA., from 10:00 A.M. until 11:00 A.M., Friday, September 11, 2015, directly followed by a Mass of Christian Burial by Fr. Richard J. Toohey, Pastor, officiating. Interment will be in Calvary Cemetery, Erie, PA. Those wishing to place memorials may do so through the Warren Senior Center, 800 Fourth Avenue, Warren, PA, 16365. E-mail condolences may be sent by visiting www.lewisfuneralhomeinc.com.