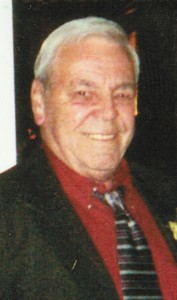 Clyde J. Brown, 81, of Warren, PA. died Wednesday evening, February 15, 2012 at the Warren Manor Nursing Home after an extended illness. He was born January 24, 1931 in Warren, PA. to the late Donald L. and Twila Maze Brown. He was a lifelong resident of Warren and was employed at the Warren State Hospital as a roofer/tinner foreman retiring in 1991 after 36 years service. He was a member of Holy Redeemer R.C. Church. Clyde was an avid hunter, fisherman, golfer and gardener.

In addition to his parents, he was preceded in death by 2 Brothers – Donald L. and Allen Brown, 2 Sisters – Lois Collins, Nancy Wright. A private memorial service will be conducted at the convenience of the family. Interment will be in Warren County Memorial Park. Those wishing to place memorials may do so through a charity of one’s choice. E-mail condolences are being accepted by visiting www.lewisfuneralhomeinc.com

The Donald E. Lewis Funeral Home, Inc. is in charge of funeral arrangements.