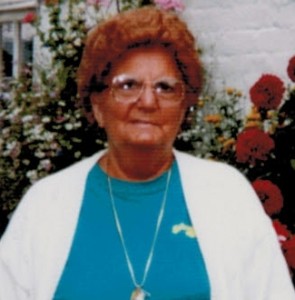 Charlotte P. Zarnick, 84, of N. Warren, PA. died Sunday, August 12, 2012 surrounded by her family. She was born August 2, 1928 in Nebraska, Forest County, PA. to the late Paul M. and Ernestine Catlin Peters. She has resided in Warren most of her life. Charlotte had been owner and operator of the former Liberty Restaurant for about 45 years and had worked at the former North American Phillips as a raw material expeditor retiring in 1984. She was a member of St. Joseph Church, North Warren Fire Dept. Ladies Auxiliary, Multiple Sclerosis Organization at the Rouse Warren County Home. She was an avid New York Mets, Buffalo Bills, Penn State Football and all around sports fan. She enjoyed her trips to Las Vegas, playing cards, champagne brunches. She is known as the Irish Meatball Queen and is famous for her meatballs and meatball soup. Her family, especially her grandchildren meant the world to her.

A private funeral service will be conducted at the convenience of the family at the Donald E. Lewis Funeral Home, Inc. by Fr. Richard J. Toohey, Pastor, officiating. Entombment will be in the Mausoleum of the Ascension in St. Joseph R.C. Cemetery. Those wishing to place memorials may do so through the St. Jude’s Children Hospital, 501 St. Jude Place, Memphis, TN 38105. E – Mail condolences may be sent by visiting www.lewisfuneralhomeinc.com