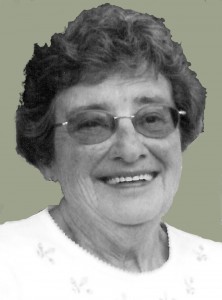 Barbara A. Allen, 79, of Warren, Pa. died Thursday, March 8, 2012 in her residence following an extended illness. Born February 20, 1933 in Tiona, Pa. to the late William Hugh and Pearl Duchaine McClellan, she lived in Warren her entire life. A 1951 graduate of Warren High School, she had worked for numerous places throughout Warren. She was a parishioner at Holy Redeemer R.C. Church. Her family was her passion. She was a great cook, and an adored mother, wife, grandmother and homemaker.

She is survived by her husband – Edward A. Allen, whom she married September 20, 1952 in Tiona; four children – Christine Allen of Warren, Barbara Premus and husband, Michael of Staten Island, NY, Edward Allen and wife, Cindy of Bear Creek, Pa., Matthew Allen and wife, Nancy of Wilton, Me.; nine grandchildren – Tony and Tom Allen, Brian and Kimberly Collins, Samantha, Matthew and Alexandra Allen, and Mariah and Arick Allen; two siblings – Pauline Barner of Erie, Pa. and Stanley McClellan and wife, Gail of Tiona.