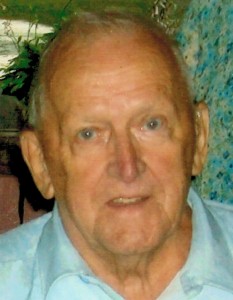 Jack G. Hammerbeck, 84, of Warren PA, died Monday evening, July 23, 2012, in UPMC Hamot, Erie PA following a brief illness. Born June 2, 1928 in Warren to the late Oscar and Jennie Genberg Hammerbeck, he was a lifelong resident of Warren. Following his 1946 graduation from Warren High School, he served in the U.S. Air Force as Airman First Class. Jack had been employed as a linesman with Penelec, retiring after 37 years as a meter reader. He was a member of the Warren Congregation of Kingdom Hall of Jehovah’s Witness. Jack was a member of the Warren Eagles Lodge #313 and enjoyed playing bingo. An outdoor enthusiast, he was a co-founder of the Farnsworth Trout Club and enjoyed hunting, fishing and gardening. Jack loved to travel and had an incredible sense of humor. He was a brilliant story teller and a flirt til’ the end. He is remembered as a man who always helped others.

Friends may call at the Donald E. Lewis Funeral Home, Inc. 304 East St., Warren, PA 16365 on Friday, July 27, 2012, from 3:00 until 5:00PM when a memorial service will be conducted with Kevin Peace, Elder of Warren Congregation of Kingdom Hall of Jehovah’s Witness, officiating. The family invites friends for a dinner following the service at the Pleasant Township Fire Hall, 539 Pleasant Dr., Warren, PA 16365. Memorial contributions may be directed to Warren Congregation of Kingdom Hall of Jehovah’s Witness, 201 Pleasant Dr. Warren, PA 16365. Online condolences may be offered to the family at www.lewisfuneralhomeinc.com