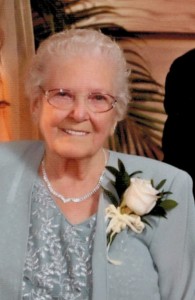 Anna B. Leonard, 86, of Warren, PA died Wednesday, September 5, 2012 in Warren General Hospital. She was born March 13, 1926 in Sharon, PA to the late Finley and Ruby Shook Beatty. She and her husband, Louis B. Leonard owned and operated a family farm on German Hill for 42 years and was a former resident of Youngsville, PA for 10 years and has resided in Warren since 2001. She was an avid crochetier, cook and enjoyed needle point. She was a talented gardener, having brought many plants back from the brink. Her greatest joy was spending time with her grandchildren and great grandchildren.

In addition to her parents, Anna was preceded in death by her husband, Louis B. Leonard, whom she married July 3, 1941 in Maryland; two sons – Louis E. Leonard and John T. Leonard; and a sister – Dorothy Loreno.

Friends may call at the Donald E. Lewis Funeral Home, Inc. 304 East St., Warren, PA 16365 on Friday, September 7, 2012 from 6:00 – 8:00 PM and on Saturday, September 8, 2012, from 10:00 until 11:00 AM when a funeral service will be conducted at the funeral home by Rev. Rick Hamrick, Pastor at Youngsville Free Methodist Church. Private interment will be in Starr Cemetery, Ashland, PA. Memorial contributions may be directed to Susan G. Komen for the Cure, Attn: Donor Services PO Box 650309, Dallas, TX 75265-0309. Condolences may be offered to the family at www.lewisfuneralhomeinc.com