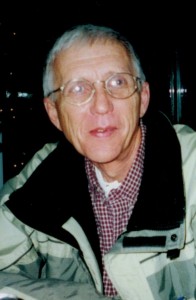 Wally was employed with United Refinery Company as a Maintenance Supervisor retiring in 2009 after 35 years employment. He was a member of the Warren Moose Lodge 109 and the Warren Eagles Aerie. He enjoyed driving his Chevy Corvette and especially enjoyed spending time with his grandchildren.

In addition to his mother, he is survived by his 3 children – Julie Johnson and husband, Brad, Sandy Schott and her companion, David Tudor all of Warren, PA., Stephanie Nelson and her companion, Corey Nelson of Russell, PA., his former wife and good friend, Cindy Tamburlin of Warren, PA., 1 Sister – Mary Lee Rossi and husband, Fred of Adrian, MI, 6 Grandchildren – Damiond Zimmerman, Mackenzie Schott, Sabrina Johnson, Destiny Nelson, Kendra Tudor, Nakita Nelson. Several nieces and nephews also survive. In addition to his father, he was preceded in death by 2 Son –in –laws, Paul Wade and Scott Nelson.

Friends may call at the Donald E. Lewis Funeral Home, Inc., 304 East Street, Warren, PA. on Monday from 2 to 4 and 6 to 8 P.M. where a funeral service will be conducted Tuesday, May 15, 2012 at 11:00 A.M. Interment will be in Oakland Cemetery. Those wishing to place memorials may do so through Hospice of Warren County, 2 Crescent Park, Warren, PA. 16365. Those wishing to submit e-mail condolences may do so by visiting www.lewisfuneralhomeinc.com