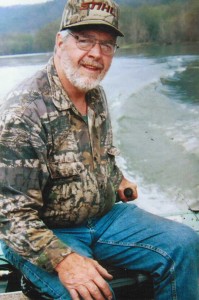 Jerry L. Salsgiver, 72, of Clarendon, PA, died Tuesday afternoon, February 7, 2012 in his residence, following a three month illness. Born September 3, 1939 in Porkey, PA to the late Wilbur and Margaret Littlefield Salsgiver, he has resided in Clarendon for the last 50 years. He served as a sharpshooter and a one mile runner in the U.S. Marine Corp; he was standby during the Korean conflict and was twice called. Jerry was employed with the former Deluxe Storage in the shipping and receiving department, retiring after 33 years of service. He was a member of the Sheffield Rod and Gun Club, Clarendon VFW and the Marine Corp League – Pendleton Detachment. He was an avid hunter – a skilled marksman and reloader. Additionally, he was avid fisherman, reader, and four-wheeler. He was an fan of NASCAR; his favorite drivers were Dale Earnhardt and Dale Earnhardt, Jr. He enjoyed reading and Sudoku puzzles, He taught trapping to his grandchildren and several other kids. He loved life in general. He was an avid Pittsburgh Steelers Fan.

In addition to his parents, he was preceded in death by 1 Brother – Donald Salsgiver, 2 Brothers-in-law, Kenneth Wingard, Gus Dascanio, 1 Sister-in-law, Betty Scott.

Friends may call at the Marine Corp League, Jackson Avenue Extension, Warren, PA. on Saturday, February 11, 2012 from 3 to 7 pm. A private family service will be conducted at the convenience of the family where full military honors will be conducted by members of the Clarendon/Sheffield VFW funeral detail and U.S. Marine Corp personnel. In lieu of flowers, memorial contributions may be made to the Salsgiver family, P.O. Box 365, Clarendon, PA. 16313. The Donald E. Lewis Funeral Home, Inc. has been entrusted with all funeral arrangements.