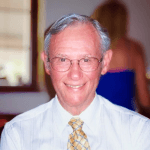 Lawrence “Larry” Krespan passed away peacefully at Warren General Hospital on Friday, May 24, 2019 after a brief illness. Larry, a life-long resident of Warren, was born on March 13, 1923 in Erie, Pa to Lawrence Peter Krespan and Edith Ann Krespan. Larry completed his secondary education at Warren Area High School, his under graduate studies at Grove City College and then attended the University of Pittsburgh School of Dental Medicine, where he earned his DDS degree. He married Grace Marie “Penny” Penrod on July 25th 1947 and was her devoted husband for 70 years until her death on May 8th 2018. Lawrence is survived by daughters: Susan L. Mader (Clarence), Beth A. Burns and sons: Lawrence P. Krespan II (Linda) and Jon C. Krespan (Beth). He was also the loving grandfather of seven grandchildren and five great grandchildren. “Dr. Krespan” began and ended his dental practice in Warren in both the field of General Dentistry as well as serving as the head of Oral Surgery at Warren General Hospital for many years. Larry worked full time until the age of Eighty-Five, the culmination of a 59 year career in which he cared for as many as three generations in some of his patient families. Larry had a deep seated love for family, church and the Warren community at large. He was an 85 year member of First Presbyterian Church, Warren, PA, where he served much of his adult life in roles such as Deacon, Elder and Clerk of Session. He was a life-long member of the Warren Lions Club and was recently acknowledged and celebrated for 75 years of service as a Mason by his Fraternal Lodge. Friends may call at the First Presbyterian Church parlors, 300 Market Street, Warren, PA on Tuesday, July 23, 2019, from 10:00 A.M. until 11:00 A.M. followed by a memorial service conducted by Rev. Rebecca Taylor, Pastor, officiating. Donations can be made to the First Presbyterian Church Bell Choir, the Shriners Hospitals for Children, 1645 West 8th Street, Erie, PA, 16505, or to the Warren Lions Club, P.O. Box 622, Warren, PA, 16365. The Donald E. Lewis Funeral Home, Inc. has been entrusted with funeral arrangements. E-mail condolences may be sent by visiting www.lewisfuneralhomeinc.com.