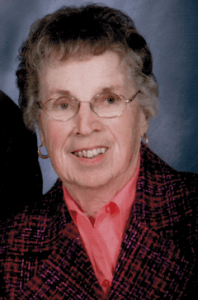 Anne M. Smith, 90, of Warren, Pa., died peacefully Wednesday evening, September 28, 2016 at the John and Orpha Blair Hospice Residence after an extended illness. She was born in Cleveland, OH. and is the daughter of the late Florian and Anna Persin Mocilnikar. Anne was a Warren area resident since 1948, moving here from Erie, PA. She was a 1944 graduate of Collinwood High School, Cleveland, OH.; she attended Ohio University and earned her Bachelor’s Degree in Sociology from Villa Maria College.

Anne was a member of Holy Redeemer R.C. Church and a volunteer at the St. Joseph Soup Kitchen. She always had a volunteer project. Even in the late stages of her illness, Anne volunteered as a greeter at Warren General Hospital and assisted families in the surgical waiting room. She also volunteered with the Garden Club at Warren State Hospital, served as a board of director with the former ARC, worked for years, teaching at the Handicap Swim program, served as a Girl Scout Leader, member of the Warren Art League, Warren Philomel, and Warren Women’s Club. She was awarded Volunteer of the Year with the Warren Unit of the American Cancer Society where she would drive patients to treatment sites. Anne was instrumental in starting the Warren Senior Center.

Anne loved life. She was equally happy watching any of her children or grandchildren at a soccer match, or attending a Warren Players production, an exhibition at the Warren Art League, a performance by the Chautauqua Opera or a Cleveland Indians game. Anne loved to travel and managed to visit many of the fifty states as well as South America, Australia, Europe, and the Caribbean. Her husband, John and she spent many winters vacationing in Myrtle Beach, S.C., golfing, walking the beach and eating at the K & W Cafeterias. Wherever Anne went, she made friends, usually by introducing herself with a homemade apple pie, a warm smile and a sincere interest.

On weekends her red station wagon was often seen speeding to the county’s best household sales. At Christmas time, Anne made thousands of cookies and hundreds of wreathes, often at parties with friends. She had unlimited love to give her husband, children, grandchildren, and great grandchildren; they were incredibly fortunate beneficiaries.

She is survived by her 6 children – Jim Smith of Baltimore, MD., Dr. Janet Smith of Ypsilanti, MI., Pat Carlson and husband, John of Warren, PA., Gary B. Smith and wife, Kathleen of Rochester, N.Y., Greg Smith and wife, Allison of Milton, Del., Marcia Smith of Warren, PA., 17 Grandchildren and 8 Great Grandchildren, several nieces and nephews. In addition to her parents, she was preceded in death on September 8, 2009 by her husband of 62 years, John J. Smith, Jr. whom she married August 30, 1947 in Cleveland, OH., and two Brothers – Florian and Gabriel Mocilnikar. Friends may call at the Donald E. Lewis Funeral Home, Inc., 304 East Street, Warren, PA., Sunday, October 2, 2016 from 5 to 8 P.M. The family will recite the rosary at the funeral home Sunday at 4:45 P.M. A Vigil service will be conducted there at 7:45 P.M.

A Concelebrate Mass of Christian Burial will be conducted Monday, October 3, 2016 at Holy Redeemer R.C. Church, 11 Russell St., Warren, PA., at 10:00 A.M. with Fr. James Gutting, Pastor and Fr. Richard J. Toohey, Pastor of St. Joseph R.C. Church, both officiating. Interment will be in St. Joseph R.C. Cemetery. Those wishing to place memorials may do so through Ohio University The John J & Anne M Smith Endowed Scholarship, 120 Chubb Hall, Athens, OH., 45701-2979 or Holy Redeemer Church Building Fund or Hospice of Warren County, 1 Main St., Warren, PA., 16365, or a charity of one’s choice. E-mail condolences can be made by visiting lewisfuneralhomeinc.com