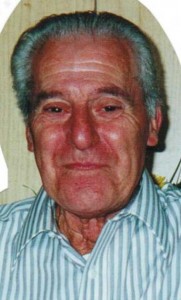 Albert “Bob” Denardi, 83, of Warren Pa, died Friday morning, January 6, 2012 in his residence. Bob was born in Warren on January 19, 1928 to the late John and Lucy Vasame Denardi. He retired from Deluxe Metal in 1990 after 42 years of service and was a member of American Legion Post 135. He served in the U.S. Navy in 1944 and the U.S. Army during the Korean Conflict. He has a member of St. Joseph R.C. Church. Bob was a passionate golfer and Notre Dame fan.

Bob is survived by his wife of 51 years, Janet Wells Denardi, whom he married June 25, 1960 in St. Joseph R.C. Church; three daughters and a son in law – Jean Denardi of Warren, Mary Pickens of Erie, Pa, and Carol and Allen Rosborough of Irvine, Pa; three grandchildren – Amber Pickens and Seth Pickens, both of Erie and Connor Rosborough of Irvine; a great granddaughter – Olivia Easter of Erie; a sister – Mary Walker of Clarendon, Pa; a brother – Frank Denardi of Warren; a Godchild – Diane Finley of Clarendon; and several nieces and nephews.

He was preceded in death by his sister – Jennie Denardi; three brothers – Charles, Nick, and Sam Denardi.

Friends may call at the Donald E. Lewis Funeral Home, Inc. from 2 to 5 pm on Sunday, January 8, 2012 with a vigil service being conducted at 4:45 pm with Fr. Michael Polinek, Parochial Vicar. A Mass of Christian Burial will be celebrated Monday, January 9, 2012 at 11 am at St. Joseph R.C. Church with Fr. Michael Polinek, Parochial Vicar, officiating. Interment will follow in St. Joseph R.C. Cemetery. Those wishing to place memorials may do so to Hospice of Warren County, 2 West Crescent Park, Warren, 16365. Online condolences may be offered at www.lewisfuneralhomeinc.com